As an actor, comedian, author, playwright, screenwriter, producer and musician—Steve Martin is one of the most diversified performers and acclaimed artists of his generation.

Martin has been successful as a writer of and performer in some of the most popular movies of recent film history—appearing in more than 50 films over the course of his career. With titles such as Planes, Trains and Automobiles, Parenthood, Father of the Bride and Cheaper by the Dozen franchises, Baby Mama and It’s Complicated, Martin’s films are the kind that are viewed again and again. Martin wrote the screenplays for some of his most celebrated films including The Jerk, Roxanne, Bowfinger, L.A. Story and Shopgirl.

Martin’s first film was a seven-minute short he wrote and starred in, The Absent-Minded Waiter. The film was nominated for an Academy Award® for Best Short Film, Live Action in 1977.

Martin’s work has earned him an Academy Award®, five Grammy® awards, an Emmy®, the Mark Twain Award, an AFI Lifetime Achievement Award and the Kennedy Center Honors. He has also hosted the Academy Awards® three times.

Martin began his career as a writer on The Smothers Brothers Comedy Hour, for which he earned his first Emmy Award® for Outstanding Writing Achievement in Comedy, Variety, or Music in 1969. In the mid-1970s, Martin shone as a stand-up on The Tonight Show Starring Johnny Carson, made appearances on HBO’s On Location and NBC’s Saturday Night Live, and became the first comedian to sell out an arena performance.

Ever evolving his body of work Martin is also a Grammy® Award winning musician who found his love for the banjo at the age of 17. Martin originally used his passion for the banjo as part of his standup comedy routine, but in 2010, he released his first album, The Crow: New Songs for the 5-Strong Banjo. Since then, Martin has played many prestigious stages including Carnegie Hall, Royal Festival Hall in London, and the Capitol Building in Washington D.C. Martin released his second full length bluegrass album Rare Bird Alert in 2011. The album featured 13 Martin-penned tracks as well as special guest vocal appearances by Paul McCartney and The Dixie Chicks. Additionally, Martin co-wrote two of the CD’s songs with the Grammy®-winning bluegrass band, Steep Canyon Rangers. That year, Martin won the International Bluegrass Music Association’s Entertainer of the Year Award. Martin also created the Steve Martin Prize for Excellence in Banjo and Bluegrass for those who exemplify outstanding bluegrass performance.

As an author, Martin’s work includes the novel An Object of Beauty, the play Picasso at the Lapin Agile, a collection of comic pieces, Pure Drivel, a bestselling novella, Shopgirl, and his memoir Born Standing Up. His latest play, Meteor Shower will premiere on Broadway this fall in a production starring Emmy Award-winner Amy Schumer, Keegan-Michael Key, Tony Award-winner Laura Benanti; and Jeremy Shamos, and directed by four-time Tony Award-winner Jerry Zaks. Previews begin November 1 at Broadway’s Booth Theatre with opening night set for November 29.

Born in Waco, TX, in 1945, Steve Martin was raised in Southern California and began working as a comedian and magician at area amusement parks, including The Magic Shop at Disneyland. Martin went on to Santa Ana College, and then earned his Theater Arts degree from UCLA. 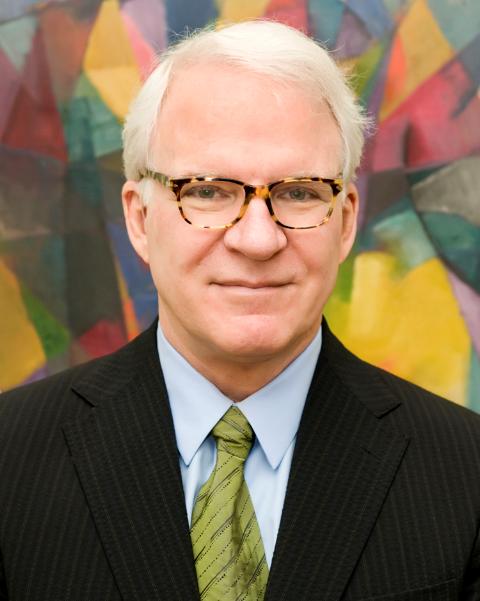